Now that the Bills' season is over, Rochesterians can focus on baseball.  The national pastime is a good fit for Rochester, a musically inclined city, but not in a top 40 sort of way.  While football is like pop music (catchy, immensely popular, and possibly overrated), baseball is more like classical music (painful at times, yet occasionally exhilarating and unrivaled).  In any event, here are a few interesting tidbits about our region's contribution to baseball: 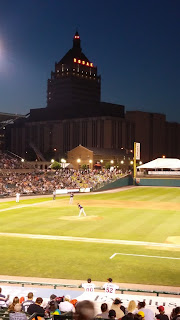 Posted by Amol Shrikhande at 7:43 PM