Despite some bumps and bruises, and despite a healthy dose of pessimism, Rochester still maintains a passionate fan base.  The obvious draw to the region is a relatively hassle-free life normally associated with a small city combined with a culturally rich life normally associated with a booming metropolis.  In many cases, the offerings of Rochester may not be immediately apparent or heavily advertised.  Yet in Rochester's usual understated manner, a small amount of exploration can lead to remarkable discovery.  A perfect example is the local architecture.  Numerous American architectural styles can be found, often in remarkable proximity to one another.  And while Buffalo has been more of an architectural destination, Rochester holds its own, even when it comes to the big names.  Here are a few examples: 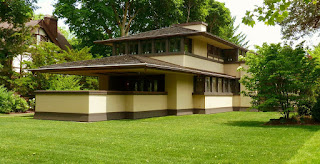 Posted by Amol Shrikhande at 5:00 AM